Changing Lives - One Camera at a Time 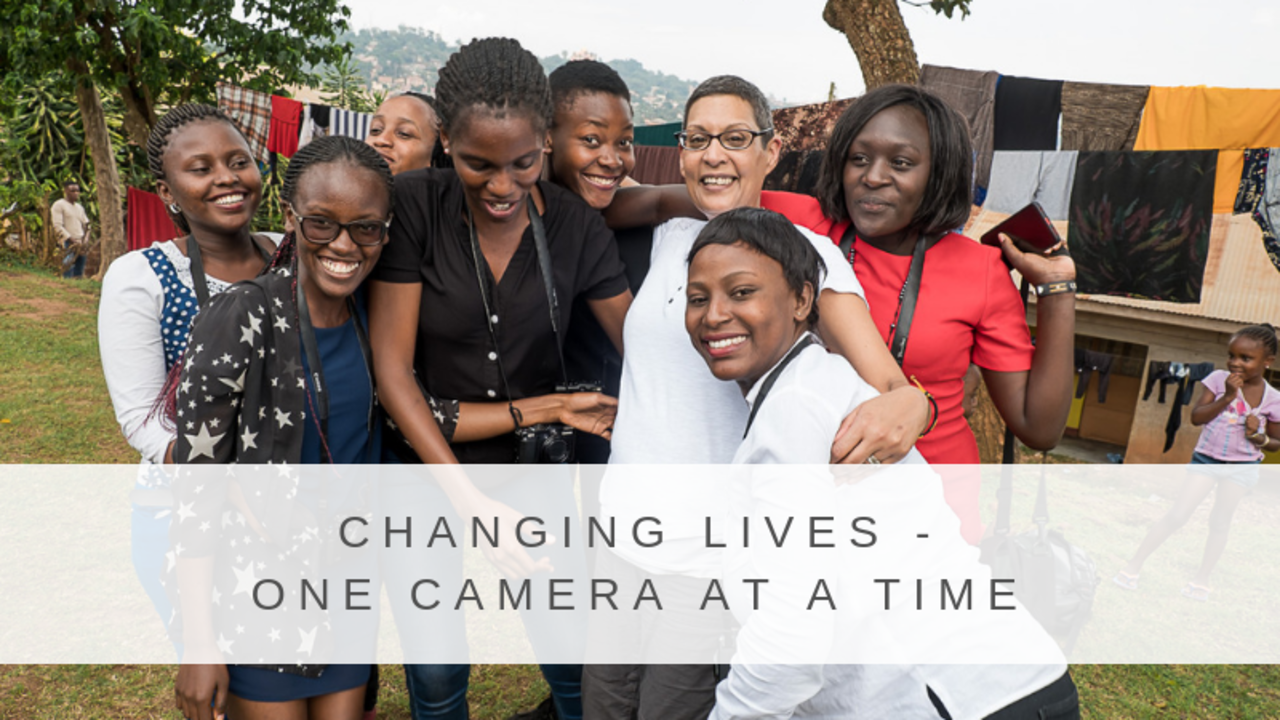 When I came up with this initiative, I had no idea how it would turn out – 2 years later and 2 trainings done, I know I am on to something good.

As a past producer in the film and television industry, I first went to Uganda in 2007 to do a documentary about the exile my family and I experienced under dictator Idi Amin in 1972.  I knew I wanted to change the plight of girls in Uganda, but I just did not know what it was at the time.

Fast forward to August 2017 and I woke up in the middle of the night with inspiration or a crazy dream – you choose!  I shook my husband awake and exclaimed “I know what I want to do for the rest of my life – I want to go to Uganda and train girls in photography” he mumbled “here we go again” as admittedly I was always coming up with crazy ideas.  He turned around and went back to bed and I started writing out the plan.

Exactly one year later I had embarked on my first training and it was my friend Venex, who is a journalist by trade, who suggested I train local girls, who were either studying to become journalists or were journalists but not necessarily getting full-time employment because they did not own a camera or know how to use it to tell their stories, thus they were not getting paid or hired.

Only one year prior I returned to my passion and love for photography, having left that world in 2009 after many great years in the industry.  So, when I re-emerged into this world, I had no idea that only 18 months later I would be travelling to Uganda and training no less than 15 young ladies in the art of photography.

I have now just returned from my second trip – where I trained 18 girls this time; 3 girls had their own camera’s but did not necessarily know how to move past the auto setting.  Over 3 days we worked from a small space in the slums and they learned all the basics; how to hold the camera, the exposure triangle, composition and more.  It was not only invigorating for them but for me as well, as it fulfilled the philanthropy side of who I am.

Something like this from far away is not feasible without support from locals on the ground and also international sponsors.  For instance, KelbyOne has been wholeheartedly supportive from the word go – they provide me with free licenses each year so the girls can learn editing and watch photography videos’ to keep up their training.  YAM Uganda is my partner on the ground and he offers free editing training to the girls on a bi-weekly basis as well as attendance at his photography and film training camps so they can take their training to the next level.  I further their training with online reviews and monthly assignments that are delivered through a Whatsapp group.

I take a year to raise funds through Go Fund Me and people are learning all about me so graciously donate cameras for use.  What I cannot use, I donate to other similar initiatives, which helps us all spread the love of photography in our own ways.  I have yet to get a camera sponsor but one step at a time and hopefully I will one day soon.

My traveller Kim, who came from BC to join me in Uganda also joined the training and as an amateur photographer, she explained that the training not only helped her improve her photography but furthermore the training alongside the girls helped her see a different side of the country and its people that she would not have gotten just seeing the sights.  That is my ultimate goal – to pair up travellers and enthusiast photographers from the west with girls in underdeveloped countries – proving to be life-changing for all.

Future plans include setting up the foundation, which is called “Cameras for Girls Uganda” and growing the brand for Triple F Photo Tours.  Each time a person books a photo-tour to Uganda. a part of the fees goes towards buying a camera for a girl and training her how to use it.

Amina Mohamed has always had a passion for photography.  In 2018 Amina returned to photography full-time combining her two greatest passions - photography and philanthropy.  Through Triple F Photo Tours, Amina takes travellers from Canada and the U.S. on a photo-tour to Uganda.  After getting this business off the ground, she created her second business with partner and friend, Kate, called Kid Awesome Photography.  Tired of getting school photos with horrible backgrounds and cheesy smiles that did not capture their children, Amina and Kate took advantage of the gap in their local market and began offering fine-art school portraits.  Now, in addition to the five schools they currently photograph, Kid Awesome Photography has expanded to family and newborn shoots and is on track to have ten schools by the end of 2019.